A Relatively Brief History of the ACLU of Pennsylvania

According to our birth certificate, our Articles of Incorporation, the ACLU of Pennsylvania started on August 10, 1951, as the “American Civil Liberties Union — Greater Philadelphia Branch.” It was the outcome of a request by the Citizen’s Council on Democratic Rights to become formally affiliated with the ACLU under that name. This request was promptly granted (it was a very short labor), and, as the ACLU-Greater Philadelphia Branch, we became the 17th designated affiliate of the ACLU. After a couple of years, our leadership determined that a more inclusive statewide name was essential, and so in 1954, the American Civil Liberties Union of Pennsylvania was born as an additional statewide affiliate.

Spencer Coxe, who was a Quaker, conscientious objector, thorn in the side of Frank Rizzo (Philadelphia’s notorious police chief and future mayor), and a savvy fighter for civil rights and criminal justice reform, became executive director in 1952 and oversaw every aspect of the development of the Pennsylvania affiliates and chapters until his retirement in 1979. Coxe had a salary and, at times, had an executive secretary who was also paid but, in these early days (and for a while thereafter), virtually all of the work was done by passionate volunteer lobbyists, lawyers, and board members. And while we now have a staff of almost 40, still much of our work continues to be done by volunteer supporters passionate about our mission.

But what about the ancestors? Where did we come from?

Post-World War I, acts of hatred and violence against immigrants, professed or supposed Communists, and people of color, illegal searches and seizures, and attacks on mining and coal union labor protests by both private and state police became all too common, along with legislation designed to make these acts legitimate. As a response, “civil liberties committees” emerged all over the state. We know from a 1931 pamphlet titled “Repeal the Sedition Act of Pennsylvania” that such committees existed in Erie, Johnstown, McKeesport, Philadelphia, Pittsburgh, Saltsburg, Scranton, Titusville, and Uniontown. By 1935, the national ACLU Annual Report identifies the Pennsylvania Civil Liberties Committee, based in Harrisburg; the Philadelphia Civil Liberties Committee; and the Pittsburgh Civil Liberties Committee. Each of these shows up with slightly different names throughout the 1930s and ‘40s.

Between 1930–1951, we had our ups and downs in Pennsylvania, both in the legislature and in the courts. For example, we won a significant decision upholding the requirement of jury trials for those held for violations of injunctions, and a judge in Philadelphia upheld the right of students not to salute the flag on religious grounds. Over the same time, however, bible reading in public schools became required in the commonwealth, strikers in the western part of the state were held without bail, and the state abolished its Bureau of Civil Liberties — the only one in any state in the country — on “economic” grounds. And on October 8, 1940, the Philadelphia Civil Liberties Committee closed its office.

However, that did not stop the work. In 1940, Roger Baldwin, executive director of the national ACLU, wrote to Allen S. Olmstead, a distinguished lawyer and subsequent ACLU-PA board vice-chair, the following letter:

“Dear Allen: I have got to call on the old stand-by in an emergency, which has arisen in Philadelphia, where I assume if you don’t have an office you can still practice law. Most lawyers of any standing don’t want to be involved in the difficulties of the Communists, and yet in Pennsylvania they seem to be wholesale victims in connection with alleged election frauds. The evidence looks like persecution, and I think we should be in on some of the cases, depending on your advice.” (excerpt)

Over the next decades, the U.S. fought a world war and two wars in Asia, grieved over the murders of a president and martyrdom of civil rights leaders, saw the rise of the “red scare” and the House Committee on Un-American Activities (HUAC), faced censorship of unparalleled breadth targeting entertainment, journalism, and media content creators and providers, created draconian loyalty oaths, fired teachers based on group membership, passed epic voting rights and civil rights legislation — and fought back against the backlash. In Pennsylvania, we reversed the prohibition against pregnant teenagers attending school after three months, we repealed (finally, in 1975) the Pechan Act, considered the most radical loyalty oath in the country, we restored the teaching jobs of teachers ousted because of their political activity, we successfully fought a law that would require individuals released from prison to post bond for “future good behavior,” and won suits requiring that Philadelphia swimming pools, skating rinks, and theaters desegregate.

Throughout the 1960s and ’70s, we fought against the Rizzo administration in Philadelphia as it persisted in supporting the police in acts of unconscionable violence and violations of civil rights, largely targeting people of color. Our precedent-setting case from 1963, Abington School District v. Schempp, struck down the practice of prayer in public schools nationally — even when a student was allowed to “opt out;” the Supreme Court ruled that school sponsorship of any religious activity in public schools violated both the First and Fourteenth Amendments.

At one point in the ’70s, the ACLU-PA board of directors had 70 members, 17 “special committees” separate from the 10-plus board committees, and identified over 18 additional chapters! By 1982, it became clear that reorganization was imperative, and, after several years, a new structure and relationship for the two affiliates and chapters were adopted, merging the ACLU-PA and the Foundation boards and staffs into one entity and assigning organization-wide budgeting and membership responsibilities to the ACLU-PA affiliate only. In 1994, we adopted the independent Clara Bell Duvall Education Foundation to grow our reproductive rights work; in 2000, the ACLU-PA and Duvall formally merged, resulting in the Clara Bell Duvall Reproductive Freedom Project.

Even as the organization restructured itself, the work went on.

In 1985, we litigated on behalf of surviving family members and children who died in the MOVE bombing. And in our 2005 victory in Kitzmiller v. Dover Area School District — the first lawsuit in the nation to challenge the teaching of “intelligent design” in biology classrooms — US District Court Judge John Jones III, declared “intelligent design” a religious view, not a scientific theory, putting a damper on other schools intending to teach creationism in their science classrooms.

In the mid-to-late ’00s, we beat back repeated efforts at the legislature to amend the state constitution to prohibit same-sex marriage, which paved the way for a later victory in court. The ACLU-PA played a key role in pushing for the biggest overhaul of the commonwealth’s Right to Know Law in a generation. And in 2009–10, our team led the push for reforms to the criminal legal system, by advocating for expansion of the ability to expunge criminal records and for a broader alternative sentencing program. A decade later, that work has flourished to the point that candidates at every level of government — from county district attorneys to city councilmembers to the state attorney general to presidential candidates — must reckon with what they’re going to do to reform criminal law and end mass incarceration.

At that same time, our organizers criss-crossed the state to convince local governments to speak up against the federal government’s abuses enshrined in the PATRIOT Act. And they were part of the team that consistently argued for repeal of the death penalty, going from church basements to schools to city halls, laying the groundwork that led to Governor Wolf implementing a moratorium on executions in 2015, which lasts to this day. 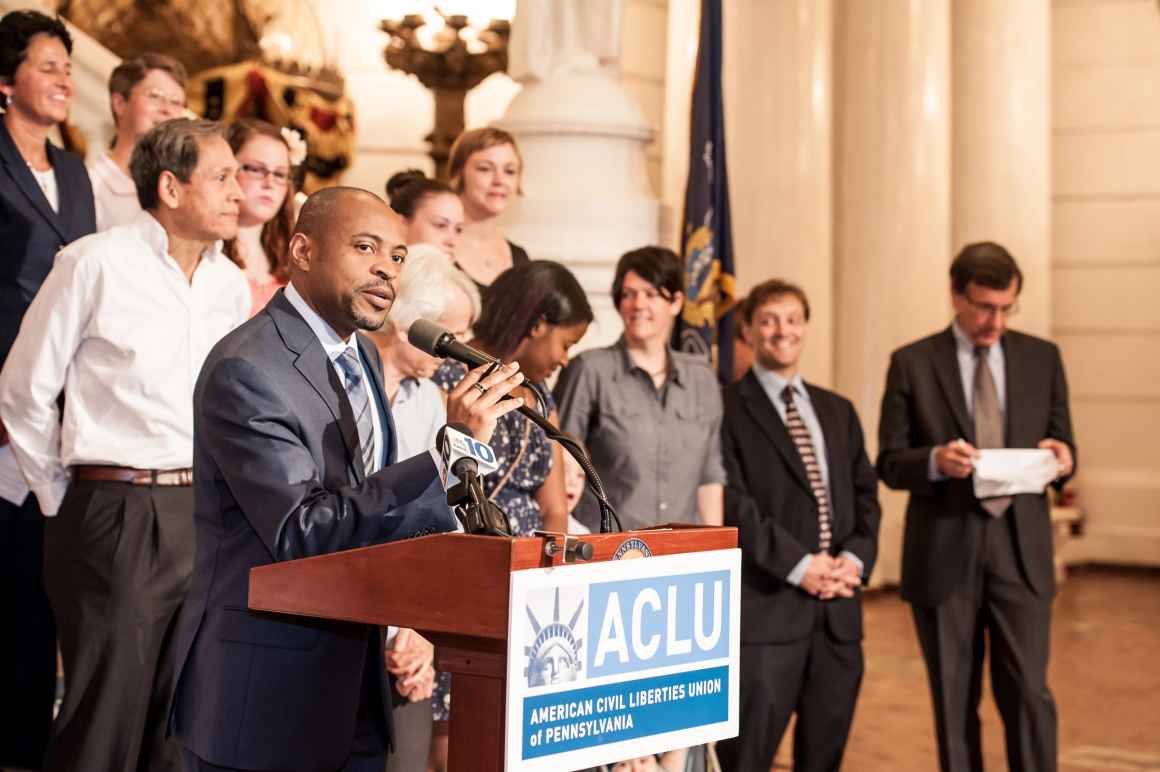 In the eight years since I became executive director, we have accomplished so much. We have more than doubled our staff, allowing us to expand the scope of our work. We have defeated anti-immigrant ordinances in Hazleton; protected the right to vote for hundreds of thousands of voters; and reversed Pennsylvania’s Defense of Marriage Act, thereby allowing Pennsylvanians to marry who they love. We protected refugees from the first Trump “Muslim ban.” We enabled a DACA recipient to become a member of the Bar in PA and New Jersey, guided the Philadelphia School District in its new policies prohibiting out-of-school suspensions of K-3rd grade students (where no serious harm has occurred), and worked with the Pittsburgh Public Schools Board of Directors to reject a proposal to arm the district’s school police officers. We very recently celebrated a huge victory for transgender students’ right to use the bathrooms and locker rooms conforming to their gender identities. These are but a few.

We engage legislators across the state to pass laws protecting and advancing the rights of Pennsylvania residents; we bring lawsuits that can change the lives of millions of people; we protest injustice; we hold workshops and presentations and testify before committees to share our knowledge and raise up crucial issues and actors. Today and every day, we do what the ACLU-PA has done from the beginning — protecting and advancing civil rights and civil liberties in the commonwealth.

ACLU of Pennsylvania is part of a network of affiliates